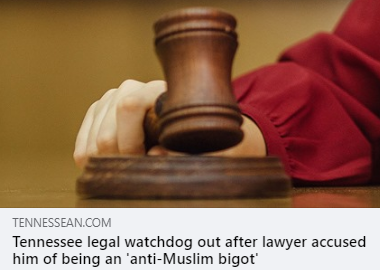 WASHINGTON, D.C., 12/12/2020) – The Council on American-Islamic Relations (CAIR), the nation’s largest Muslim civil rights and advocacy organization, today welcomed the removal a staff attorney for the Tennessee Board of Professional Responsibility (BPR) after allegations that he posted anti-Muslim messages online. [NOTE: BPR is an ethics watchdog for that state’s attorneys.]

In a court filing, the BPR said Jerry Morgan was “no longer employed” as a disciplinary counsel. According to the filing, Morgan reportedly tweeted praise of Donald Trump for “stopping Muslims” and “talking big against Muslims.” An attorney in the case referred to Morgan’s “apparent termination.”

SEE: Tennessee legal watchdog out after lawyer accused him of being an ‘anti-Muslim bigot’

On Thursday, CAIR called for independent investigation of the attorney’s alleged anti-Muslim posts.

“We welcome this development involving the Tennessee Board of Professional Responsibility as a sign that bigotry and bias will not be tolerated or excused,” said CAIR National Communications Director Ibrahim Hooper.