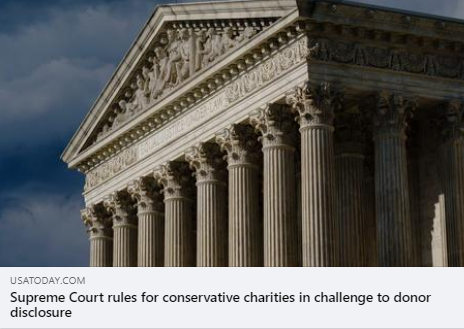 (WASHINGTON, DC, 7/1/2021) – The Council on American-Islamic Relations (CAIR), the nation’s largest Muslim civil rights and advocacy organization, today welcomed the U.S. Supreme Court’s decision in Americans for Prosperity v. Bonta affirming the right of nonprofit and civil rights organizations to maintain the confidentiality of their members and donors.

As the Court explained, the chilling effect on the First Amendment’s guaranteed right to association based on the potential that information would leak to the public was profound. “When it comes to the freedom of association, the protections of the First Amendment are triggered not only by actual restrictions on an individual’s ability to join with others to further shared goals. The risk of a chilling effect on association is enough.”

Earlier this year, CAIR filed an amicus brief in this case that explained how governments improperly use bulk collection of data to target disfavored minorities. As its amicus brief described, “[t]he federal terrorist watchlist system rests on a foundation of bulk collection and analysis of American Muslims’ associations.”

CAIR’s brief was noted by Chief Justice Roberts in the Supreme Court’s majority opinion. Specifically mentioning CAIR’s brief, among others, the Supreme Court recognized CAIR’s concerns. “The deterrent effect feared by these organizations is real and pervasive, even if their concerns are not shared by every single charity operating or raising funds in California.”

CAIR’s Civil Rights Director, Lena Masri lauded the Court’s decision: “Our ability to protect members and donors from reprisal is what allows us to fight for our rights as a community. This decision protects not only CAIR, but also the American Muslim and civil rights communities.”

“As the majority recognized, governments used association data to target civil rights organizations,” said CAIR Trial Attorney Justin Sadowsky. “The Supreme Court reaffirmed Civil Rights Era decisions holding that collection of such information unconstitutional because it could be used for targeting as just as important today as it was then. The First Amendment’s protection of the freedom of association continues to remain valid today, particularly in the digital age.”