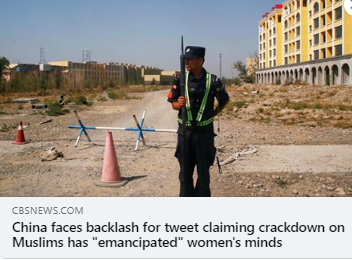 Last Thursday, China’s U.S. Embassy posted a state media report defending China’s oppression of Uyghur Muslims and other Turkic ethnic minorities in China by claiming that Muslim women in Xinjiang are “no longer baby-making machines” and that the decreased population growth in the province led to a drop in terrorism.

CAIR and other organizations condemned the tweet as an admission and celebration of genocide, and called on Twitter to remove the post, which the social media platform did on Saturday.

“We welcome Twitter’s decision to stand up to China by removing this horrific post, which celebrated the Chinese government’s ongoing genocide of Uyghur Muslims, including forced sterilizations and abortions carried out in concentration camps. Twitter did the right thing in this case, and now leaders and nations around the world must do the same by taking concrete action to end China’s genocide of Uyghur Muslims.”