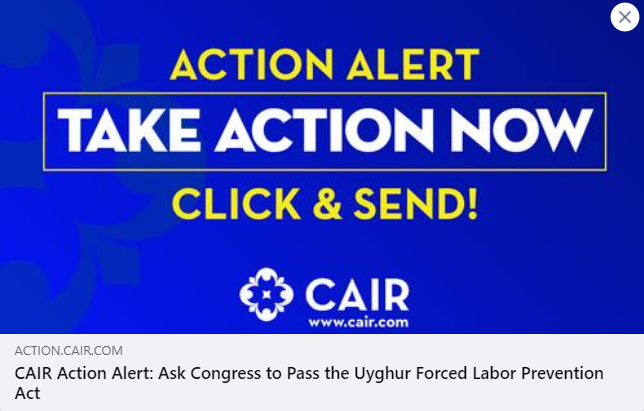 (WASHINGTON, D.C., 7/15/21) – The Council on American-Islamic Relations (CAIR), the nation’s largest Muslim civil rights and advocacy organization, today welcomed the U.S. Senate’s unanimous passage of the Uyghur Forced Labor Prevention Act and called on the House of Representatives to adopt the bill without delay.

The Uyghur Forced Labor Prevention Act would create a “rebuttable presumption” that any goods made in the Xinjiang are made with forced labor and prohibited from entering the United States unless “clear and convincing” evidence is shown to the contrary.

“CAIR welcomes the Senate’s unanimous passage of the Uyghur Forced Labor Prevention Act and urges members of the House to adopt the bill without delay,” said CAIR Director of Government Affairs Department Robert S. McCaw. “The United States must do everything it can to ensure American consumers and companies are not contributing to China’s genocide of Uyghur Muslims and its forced labor camps.”

Last week CAIR welcomed a report from Reuters that the U.S. Department of Commerce plans to as early as today “add more than 10 Chinese companies to its economic blacklist over alleged human rights abuses and high-tech surveillance” of Uyghur Muslims and other Turkic minorities in the Uyghur region.

Last month, the Biden Administration added five Chinese companies to the Department of Commerce’s entity list for participating in China’s campaign of forced labor against Muslims in XUAR.

CAIR welcomed the initial 2019 U.S. blacklisting of 28 Chinese surveillance, artificial intelligence and other technology companies that were allegedly being used to repress Uyghur and other Muslim minority groups in China.

In addition to blocking imports from these companies, U.S. companies are barred from selling technology to companies placed on the Commerce Department’s Entity List without first seeking government approval.

CAIR is currently calling on Virginia-based Hilton Worldwide Holdings (HTL) to drop plans to build a Hilton Hotel in XUAR on the site of a bulldozed and desecrated mosque.

Last month, The Telegraph reported that China is building a new commercial center—including a luxury Hilton Hotel— on a plot of land where a mosque was initially bulldozed and desecrated.

CAIR also welcomed the Biden administration’s formal United States’ recognition that the government of China is committing “genocide and crimes against humanity” against Uyghur Muslim and other Turkic minorities in XUAR.

In March of this year, CAIR and Free Uyghur Now hosted the “Call It Genocide” Uyghur Muslim rights rally in front of the Chinese Embassy in Washington, D.C., urging the U.S. government to formally recognize China’s genocide of Uyghur Muslims and other Turkic minorities.