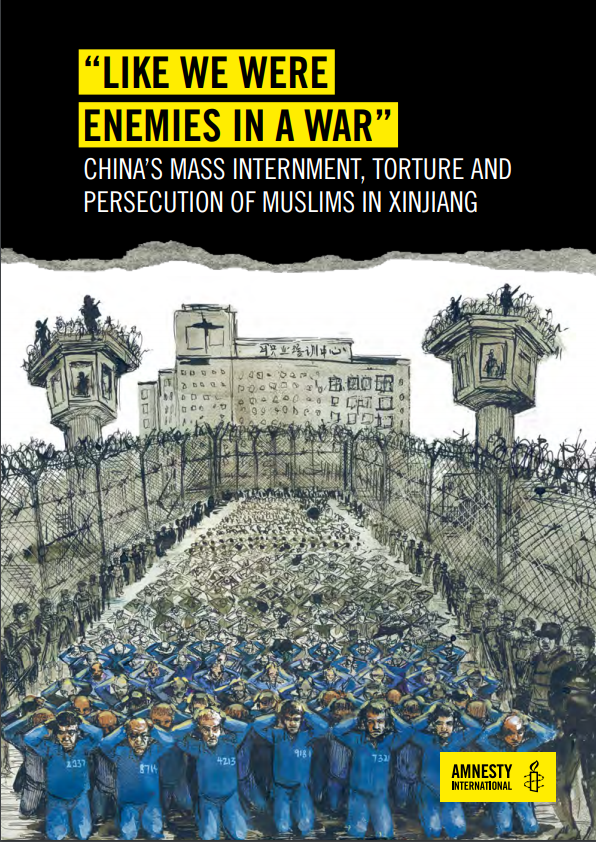 Amnesty Report — China: “Like We Were Enemies in a War”: China’s Mass Internment, Torture, and Persecution of Muslims In Xinjiang

That report states in part:

“Since 2017, under the guise of a campaign against ‘terrorism’, the government of China has carried out massive and systematic abuses against Muslims living in the Xinjiang Uyghur Autonomous Region (Xinjiang). Far from a legitimate response to the purported terrorist threat, the government’s campaign evinces a clear intent to target parts of Xinjiang’s population collectively on the basis of religion and ethnicity and to use severe violence and intimidation to root out Islamic religious beliefs and Turkic Muslim ethno-cultural practices. The government aims to replace these beliefs and practices with secular state-sanctioned views and behaviours, and, ultimately, to forcibly assimilate members of these ethnic groups into a homogenous Chinese nation possessing a unified language, culture, and unwavering loyalty to the Chinese Communist Party (CCP).

“To achieve this political indoctrination and forced cultural assimilation, the government undertook a campaign of arbitrary mass detention. Huge numbers of men and women from predominantly Muslim ethnic groups have been detained. They include hundreds of thousands who have been sent to prisons as well as hundreds of thousands – perhaps 1 million or more – who have been sent to what the government refers to as ‘training’ or ‘education’ centres. These facilities are more accurately described as internment camps. Detainees in these camps are subjected to a ceaseless indoctrination campaign as well as physical and psychological torture and other forms of ill-treatment.”

“This comprehensive report from Amnesty International is another reason why there must be immediate international action to stop the Chinese government’s ongoing campaign of genocide against its Uyghur Muslim community. Nations have said ‘Never again’ after prior atrocities, but that phrase will be nothing more than a slogan unless the world–starting with Muslim-majority nations–condemn and take action to end China’s unprecedented crime against humanity.”

Earlier this year, CAIR welcomed the Biden administration’s first formal United States’ recognition that the government of China is committing “genocide and crimes against humanity” against Uyghur Muslim and other Turkic minorities in the Xinjiang region.

In March, CAIR and Free Uyghur Now hosted the “Call It Genocide” Uyghur Muslim rights rally in front of the Chinese Embassy in Washington, D.C., urging the U.S. government to formally recognize China’s genocide of Uyghur Muslims and other Turkic minorities.

“Genocide and crimes against humanity occurred during the year against the predominantly Muslim Uyghurs and other ethnic and religious minority groups in Xinjiang. These crimes were continuing and include: the arbitrary imprisonment or other severe deprivation of physical liberty of more than one million civilians; forced sterilization, coerced abortions, and more restrictive application of China’s birth control policies; rape; torture of a large number of those arbitrarily detained; forced labor; and the imposition of draconian restrictions on freedom of religion or belief, freedom of expression, and freedom of movement.

In February, CAIR called for “immediate and concrete” action by the Biden administration and the international community following a BBC report on mass rape, sexual abuse and torture in Uyghur concentration camps in China’s Xinjiang province.

In January, CAIR praised then President-elect Joe Biden’s inaugural committee for refunding a $500 donation from former California U.S. Senator Barbra Boxer, who recently registered as a foreign agent due to her lobbying work on behalf of a Chinese firm that has allegedly helped China imprison hundreds of thousands of Uyghur Muslims in concentration camps.

In December 2020, CAIR join the US Council of Muslim Organizations (USCMO), Free Uyghur Now, and other global allies in a virtual press conference calling on the Organization of Islamic Cooperation (OIC) to join the international community in standing with Uyghur Muslims and other Turkic ethnic minorities to demand accountability for China’s human rights violations in Xinjiang.