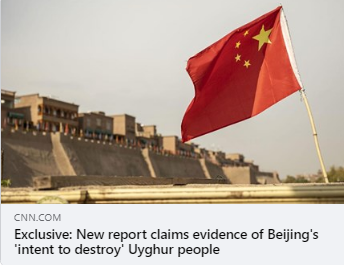 Civil rights group calls on international community, including Muslim-majority nations, to speak out

According to CNN, an independent report produced by 50 global experts in human rights working with the Newlines Institute for Strategy and Policy has concluded that China’s treatment of Uyghur Muslims has “violated every single provision in the United Nations’ Genocide Convention,” and “bears state responsibility for an ongoing genocide against the Uyghur in breach of the (UN) Genocide Convention.”

“This independent, expert report confirms what the world already knows: China is actively using kidnapping, torture, rape, forced sterilization, and other forms of violence to perpetrate a genocide against Uyghur Muslims inspired by Islamophobia.

“Here at home, Congress must immediately hold corporations that continue to do business with China — especially in the Xinjiang region — accountable for supporting and enabling a genocide. Overseas, every nation must speak out strongly against these crimes. That is especially true for Muslim-majority nations.”

The Uyghur Forced Labor Prevention Act is a bipartisan bill that would prohibit the importation of goods made with forced labor in China’s Xinjiang Uyghur Autonomous Region by Uyghur Muslims and other Turkic ethnic minorities.

The Act would create a “rebuttable presumption” that any goods made in the Xinjiang are made with forced labor and prohibited from entering the United States unless “clear and convincing” evidence is shown to the contrary. The full text of the bill is available here.

Domestically, the Council on American-Islamic Relations has remained steadfast in its campaigns on behalf of Uyghur Muslims. CAIR has welcomed the endeavors of the US government to ban Chinese slave labor cotton imports and continues to support Congress’ forced labor legislation.