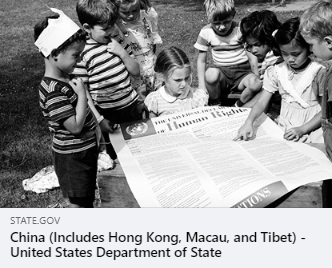 (WASHINGTON, D.C., 3/31/21) – The Council on American-Islamic Relations (CAIR), the nation’s largest Muslim civil rights and advocacy organization, today welcomed the Biden-Harris administration’s first formal United States’ recognition that the government of China is committing “genocide and crimes against humanity” against Uyghur Muslim and other Turkic minorities in the Xinjiang region.

“Now that the Biden administration has recognized that China is committing genocide, our nation must take every possible action to stand against these crimes against humanity. The United States must ramp up its sanctions against China and revoke the visas for travel to the United States of all Chinese officials linked to the genocide.

“We must also hold American and international corporations that do business in China and the Xinjiang region accountable. That is why CAIR continues to call on Congress to adopt the Uyghur Forced Labor Prevention Act.

“There must not be any more delay in passing the Uyghur Forced Labor Prevention Act. Congress needs to immediately pass this act and President Biden must sign it into law.

“The American Muslim community will continue to stand in solidarity with our Uyghur Muslim and Turkic brother and sisters.”

“Genocide and crimes against humanity occurred during the year against the predominantly Muslim Uyghurs and other ethnic and religious minority groups in Xinjiang. These crimes were continuing and include: the arbitrary imprisonment or other severe deprivation of physical liberty of more than one million civilians; forced sterilization, coerced abortions, and more restrictive application of China’s birth control policies; rape; torture of a large number of those arbitrarily detained; forced labor; and the imposition of draconian restrictions on freedom of religion or belief, freedom of expression, and freedom of movement.

In February, CAIR called for “immediate and concrete” action by the Biden administration and the international community following a BBC report on mass rape, sexual abuse and torture in Uyghur concentration camps in China’s Xinjiang province.

In January, CAIR praised then President-elect Joe Biden’s inaugural committee for refunding a $500 donation from former California U.S. Senator Barbra Boxer, who recently registered as a foreign agent due to her lobbying work on behalf of a Chinese firm that has allegedly helped China imprison hundreds of thousands of Uyghur Muslims in concentration camps.

In December, CAIR join the US Council of Muslim Organizations (USCMO), Free Uyghur Now, and other global allies in a virtual press conference calling on the Organization of Islamic Cooperation (OIC) to join the international community in standing with Uyghur Muslims and other Turkic ethnic minorities to demand accountability for China’s human rights violations in Xinjiang.