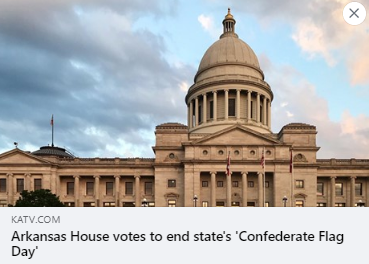 Little Rock,Ark., Rep. Austin McCollum (R-Ark.) spearheaded a bill in the Arkansas House of Representatives to abolish the state holiday commemorating the Confederate flag. The House recently voted in favor of the bill 80-7. The legislation would replace “Flag day” with another state holiday — “Arkansas Day” — celebrating Arkansas’ statehood. It is now headed to the Senate before being enacted as a law. Arkansas Governor Asa Hutchinson supports the measure. [NOTE: Flag Day was established in 1957 in opposition to the desegregation of the Little Rock Central High School.]

“CAIR welcomes this vote as a victory for mutual respect and for the rejection of white supremacy,” said CAIR Government Affairs Director Robert McCaw. “Every state should take whatever measures are necessary to eliminate the legacy of the Confederacy’s racism and white supremacy.”