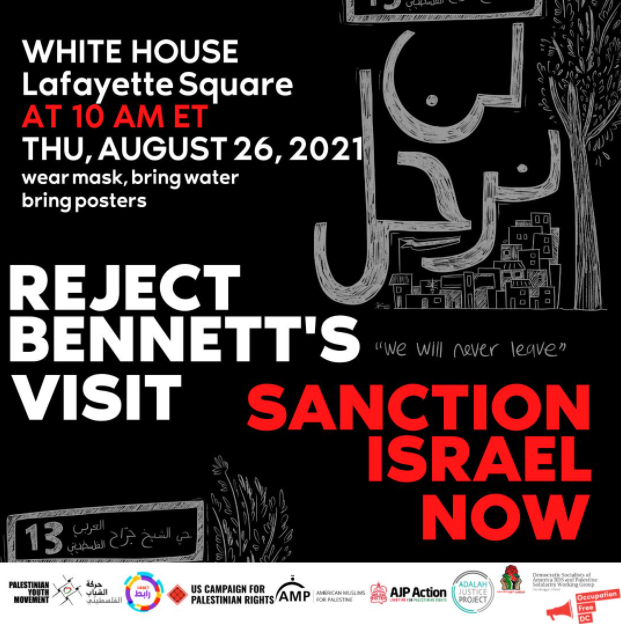 WHERE: Outside the White House, Lafayette Square, Washington, D.C.

PRESS CONFERENCE: Members of the media are invited to attend the press conference THAT will be held in front of the White House on BLM Plaza/Lafayette Square at 9:45 AM on Thursday, Aug. 26.

For more information or to schedule an interview:

US Campaign for Palestinian Rights: Cat Knarr at cat@uscpr.org

The groups will demand an end to the Israeli government’s ongoing and systematic violations of Palestinian human rights, and the Biden administration’s unconditional support for Israeli apartheid. The protest calls for an end to US military and diplomatic support of all human rights violations, including an immediate halt to forced expulsions of Palestinians from their homes in Jerusalem, and the suffocating siege of Gaza.

“After witnessing the horrors imposed on the Palestinian people by the Israeli government, especially during the latest Israeli massacre of Palestinians in the Gaza Strip, it is imperative that the international community and the United States stop pretending to be blind when it comes to Israel’s criminal behavior. Israel interprets the silence as a license to kill. As Israel continues to treat Palestinians as dispensable and foreigners in their own land, we protest the normalization of war crimes and war criminals. The time is long overdue for Israel to be held accountable for its shocking abuses, and the US government must stop enabling those crimes with our tax dollars. President Biden’s claim of America’s ‘moral authority’ must not be selective and hypocritical in nature, and the least he can do is use this visit as an opportunity to take the first step at ending the normalization of human rights abuses.”

“While Bennett’s government is stalling reconstruction in Gaza – following Israel’s murder of 265 Palestinian civilians in Gaza – the Biden administration refuses to hold its flow of U.S. military aid and weapons to that state. It is incumbent that President Biden demand Israel immediately halt its killing of Palestinian protesters, confiscation of Palestinian land and cease interfering in the reconstruction of Gaza.”

“It is more important now than ever to join movements for justice in rejecting Israeli apartheid, and to demand that the US stop its political, economic and military support of its genocidal policies that Bennet symbolizes and has perpetuated.”

“Red carpet rollouts for war criminals like Bennett keep the Palestinian people under perpetual apartheid and colonial control, while ensuring that US policy will continue to prioritize injustice over human rights.”

“Biden is actively endorsing a right-wing leader of an apartheid state. The visit indicates that “the peace process” is not about peace — it is about continuing Israeli expansion at the cost of Palestine and its people. The events of the past three months signify a new era of youth organizing for Palestine. We will not back down and will continue resisting to call for an end to forced expulsion, demolition, administrative detentions, and ethnic cleansing.”

In 2021 alone, the Biden administration protected Israel’s impunity on the international stage by opposing a ceasefire during Israel’s onslaught on the Gaza Strip and an investigation into Israel’s violations of human rights. Contrary to campaign promises, the Biden Administration upheld Trump-era policies including maintaining the US Embassy to Israel in Jerusalem and recognizing Israeli sovereignty over the annexed Golan Heights. The Biden Administration’s hypocrisy has also been prevalent when it comes to the so-called deal of the century. Last year, Biden tweeted that Trump’s roadmap to peace was “not the way,” yet the White House statement affirms that the administration is committed to the sham plan towards ‘peace, security, and prosperity,’ that excludes Palestinian voices and the right to self-determination.

Since taking office earlier this year, Biden has approved increased weapons’ deliveries to Israel despite congressional opposition. During Thursday’s meeting, he is likely to provide unconditional support to Israel’s systematic policies of settler-colonial violence against the Palestinian people.