ACTION ALERT: Urge Your Senators to Condemn Both Israel’s Attacks on Masjid Al-Aqsa and Effort to Expel Palestinian Families from Sheikh Jarrah 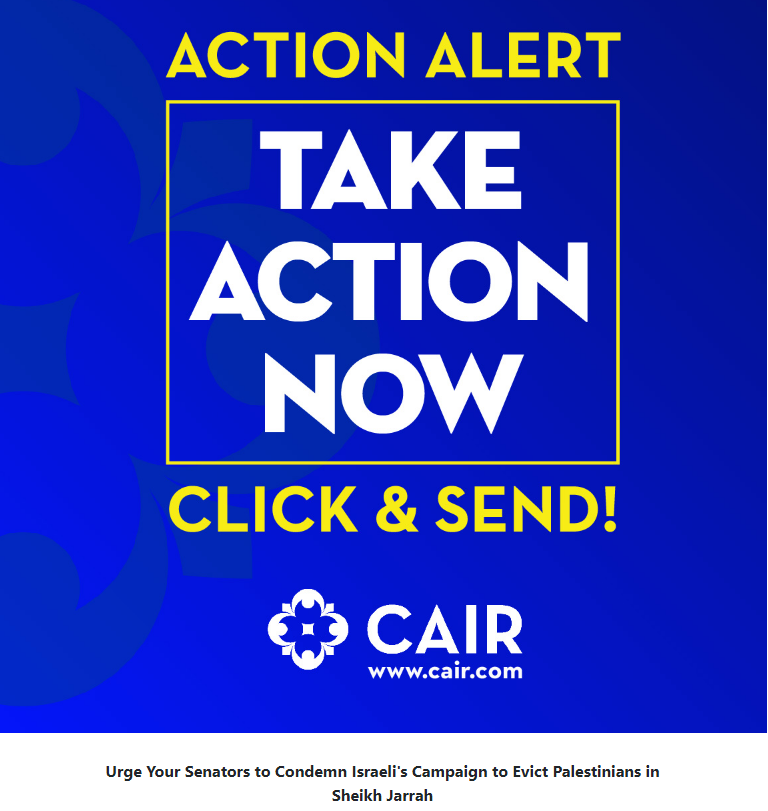 (WASHINGTON, D.C., 5/10/21) – The Council on American-Islamic Relations (CAIR), the nation’s largest Muslim civil rights and advocacy organization, is calling all Americans to contact their U.S. Senators and the Biden Administration to demand that they publicly condemn and oppose the Israeli government’s campaign to expel Palestinian families from Jerusalem’s Sheikh Jarrah neighborhood, as well as violent attacks on Palestinian worshippers and protesters at the Al-Aqsa Masjid.

SEE: Sign now to call on the U.S. State Department and Department of Defense: Demand an end to Israel’s forced displacement of Palestinians from East Jerusalem

The Biden-Administration and members of the Senate Foreign Relations Committee should follow the recommendations of Representatives Marie Newman (D-IL) and Mark Pocan’s (WI-D) letter to Secretary Blinken urging him to:

“Immediately send the strongest possible diplomatic message to Israel to desist from its plans to demolish Palestinian homes in Al-Bustan and evict Palestinians from their homes in Sheikh Jarrah” and should Israel persist to send State Department “observers to document Israel’s forced displacement of Palestinians, including details on the military units involved in these operations and the usage of any U.S. weapons for purposes of oversight and accountability regarding Leahy Law and AECA violations.”

As this makes clear, evictions of families in East Jerusalem would violate international law. If the Biden Administration puts the rule of law and human rights at the heart of its foreign policy, this is not a moment for tepid statements.

Hundreds of Palestinians are on the verge of being kicked out of their homes by the Israeli government right now. Join me in demanding that Palestinians be able to remain on their own land. Sign petition to #StopJerusalemExpulsions & #SaveSheikhJarrah

I know what it’s like to be brutalized for simply advocating for my own humanity. I stand in strong solidarity with our Palestinian siblings mobilizing to #SaveSheikhJarrah.

I’m calling on you to condemn these attacks immediately.

The violent attempts to displace families in the Sheikh Jarrah neighborhood are appalling. The State Department must condemn ongoing Israeli police violence against Palestinians.

We stand in solidarity with the Palestinian residents of Sheikh Jarrah in East Jerusalem. Israeli forces are forcing families from their homes during Ramadan and inflicting violence. It is inhumane and the US must show leadership in safeguarding the human rights of Palestinians.

This is happening as Muslims pray tarawih & tahajud in Palestine. Families who pray all night during Ramadan, the mosque is like home. Palestinians deserve to find refuge in a mosque and peace in Ramadan. Where is the media coverage?

I am extremely dismayed by Israel’s efforts to forcefully evict Palestinians from their homes in #SheikhJarrah. The U.S. must show more leadership on the issue of Palestinian rights in the Holy Land, the West Bank and Gaza.

I am calling on the Administration and the international community to act on this tragic and unfair displacement.

Firing rockets from Gaza into Israel is an attack that I condemn unequivocally. This violence must stop. Israeli violence against Palestinian protesters in #SheikhJarrah – East Jerusalem also must end. Peace & security will only be achieved by ending Israel’s military occupation.

The violence and forced displacement of Palestinians in #SheikhJarrah is deeply disturbing and morally wrong. We must ensure any US involvement in the region continues efforts toward lasting peace – including the protection of human rights.