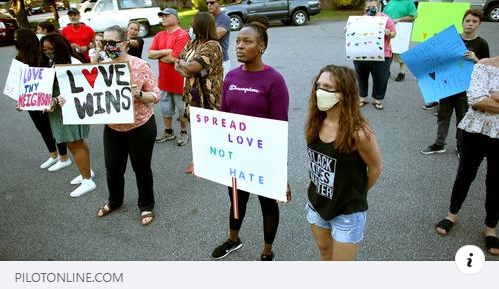 (WASHINGTON D.C., 10/7/2021) – The Council on American-Islamic Relations (CAIR), the nation’s largest Muslim civil rights and advocacy organization, today called for action to protect a family from racist harassment in Virginia.

CAIR also welcomed the resignation of a teacher in North Carolina who made racist comments in class and the renaming of a street in Alabama originally named for the president of the Confederacy after a civil rights leader.

In Virginia Beach, Va., community members have come together to support a Black family that has been experiencing racist harassment from a neighbor for years. Since 2017, the neighbor has blared monkey noises, racial slurs, and banjo music at the family at a high volume. The family has sought help from the Virginia Beach police and Magistrate’s Office and a civil judge, who all said there was nothing they could do because the neighbor didn’t break any laws or threaten the family.

“The racist harassment this family has endured is appalling and cannot be allowed to continue. It is hard to believe that no action can be taken by authorities to put a stop to it. We urge law enforcement authorities and public officials to take action to protect this family, and we urge authorities nationwide to crack down on growing bias-motivated harassment and intimidation.”

In Birmingham, Ala., a street previously named for Jefferson Davis, the president of the Confederacy, has been renamed to honor Fred Gray, a civil rights leader and attorney who represented Martin Luther King, Jr. and Rosa Parks. The city council’s approval of the measure could cost them a $25,000 fine under a state law passed in 2017 to protect Confederate monuments. Birmingham’s Mayor Steven Reed, the first Black man to hold that position, told the media he already offered to pay the penalty.

In North Carolina, an eighth-grade literature teacher resigned after making racist comments in class. According to reports from students and parents, the teacher asked Black students to stand up or raise their hands and said “well if it wasn’t for the constitution, you would all be my field slaves or my slaves working in the field.” After backlash from parents in the community, the teacher was reportedly asked to resign.

“Racism has no place in the public sphere, and we welcome all measures to address the legacy of white supremacy,” said CAIR National Communications Coordinator Ismail Allison. “We urge all public institutions to challenge racism in their midst and work to promote a more just and equitable society.”