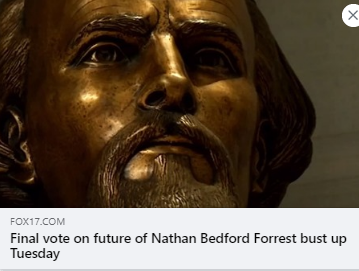 (WASHINGTON, D.C., 3/8/2021) – The Council on American-Islamic Relations (CAIR), the nation’s largest Muslim civil liberties and advocacy organization, today supported a vote scheduled tomorrow by the Tennessee Historical Commission that could lead to the removal of a bust of Confederate general and early leader of the Ku Klux Klan Nathan Bedford Forrest from the State Capitol.

Commissioners are scheduled to vote Tuesday in a meeting that will be streamed online. His bust was approved by the state legislature in 1973.

“A decision to remove a statue honoring a racist leader and traitor to our nation would send a strong message of support to all those who value equality and respect for others,” said CAIR National Communications Director Ibrahim Hooper. “We urge the Tennessee Historical Commission to do everything in its power to remove this symbol of hate.”

He noted that earlier today, CAIR’s New York chapter condemned an alleged racist attack in Lower Manhattan in which the assailant shouted “F—k you, Mexican.”

Also today, CAIR welcomed the suspension of three professors from the University of Southern Alabama (USA) for dressing in racist costumes.