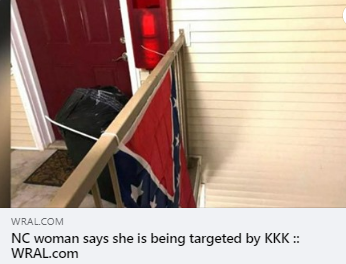 (WASHINGTON, D.C., 4/13/2021) — The Council on American-Islamic Relations (CAIR), the nation’s largest Muslim civil rights and advocacy organization, today called on law enforcement authorities in North Carolina to investigate racist incidents targeting a family in that state as a hate crime.

A confederate flag was tied to the family’s front door, which was the second time they have been targeted hate. A flyer from the racist group KKK had previously been stuck to the family’s door. The family believes the intimidation was prompted by activism against local Confederate monuments.

SEE: ‘It’s out of hand’: Woman finds confederate flag on door, says she was targeted by KKK

NC woman says she is being targeted by KKK

“These troubling incidents should be treated as possible hate crimes and investigated accordingly,” said CAIR National Communications Director Ibrahim Hooper. “No family should have to face such racist intimidation in North Carolina or any other state.”