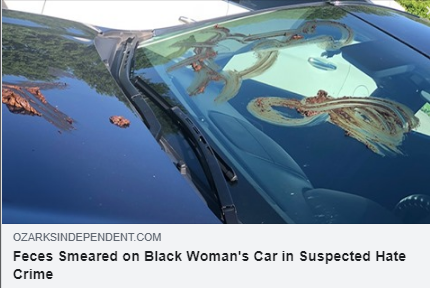 (WASHINGTON, D.C., 6/7/20) – The Council on American-Islamic Relations (CAIR), the nation’s largest Muslim civil rights and advocacy organization, today called on state and federal law enforcement authorities to investigate the vandalism of a black woman’s car in Springfield, Mo., as a possible hate crime.

The woman, an immigrant from Kenya, said she went for a run and when she returned to her vehicle it was covered in feces and the right-side tires were flattened. The incident coincided with a Black Lives Matter march in Springfield.

“Appalling and Unacceptable” Park Board reacts to vandalism at McDaniel Park

“Because of the nature of the vandalism and the background of the victim, and coming as it did on the same day as a local anti-racist march, we ask local, state and federal law enforcement authorities to investigate this attack as a possible hate crime,” said CAIR National Communications Director Ibrahim Hooper.

He noted that CAIR and the American Muslim community are standing in solidarity with all those challenging anti-black racism.