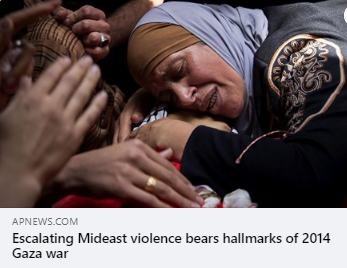 (WASHINGTON, D.C., 5/12/21) – The Council on American-Islamic Relations (CAIR), the nation’s largest Muslim civil rights and advocacy organization, today called on the Biden administration to end its silence in response to Israel ignoring White House calls for de-escalation and opting to increase missile strikes on Palestinian civilians prior to engaging in ceasefire talks.

CAIR is also urging the Biden administration to cease blocking United Nations Security Council attempts to issue a joint statement on the situation in Gaza.

“President Biden must not remain silent about Israel’s unjust and disproportionate use of force against Palestinians in Gaza. Unrestrained aerial bombardments of civilian populations must be condemned immediately. Gaza is a densely populated area and Israel’s claims that Palestinian deaths and destruction of civilian infrastructure are unavoidable is a war crime.

“Deliberate attacks designed to inflict maximum harm on the civilian population have for too long been ignored by our nation’s leaders. Silence over Israeli abuses of Palestinian civilians and religious institutions inevitably leads to apartheid-like ethnic cleansing.

“The Biden administration should stop tying the hands of the U.N. Security Council from issuing a joint statement on the mounting civilian deaths in Gaza. It is immoral and unjust to aid the occupier and disregard the rights of those under occupation.”

According to a report from the Associated Press this morning:

“The death toll in Gaza rose to 48 Palestinians, including 14 children and three women, according to the Health Ministry. More than 300 people have been wounded, including 86 children and 39 women. Six Israelis, including a soldier, three women and a child, were killed, and dozens of people were wounded.”

Armed groups from Gaza have fired hundreds of rockets into Israeli territory in response to the Israeli government’s violent attacks on Palestinian worshippers and protesters at the Al-Aqsa Masjid and ongoing campaign to expel Palestinian families from Jerusalem’s Sheikh Jarrah neighborhood.

Yesterday, CAIR representatives marched and spoke at a #SaveSheikJarrah rally in front of the U.S. State Department in Washington, D.C. CAIR was a co-sponsor of that event.

On Monday, CAIR issued an action alert calling all Americans to contact their U.S. Senators and the Biden Administration to demand that they publicly condemn and oppose the Israeli government’s campaign to expel Palestinian families from Jerusalem’s Sheikh Jarrah neighborhood, as well as violent attacks on the Al-Aqsa Masjid.

SEE: ACTION ALERT: Urge Your Senators to Condemn Both Israel’s Attacks on Masjid Al-Aqsa and Effort to Expel Palestinian Families from Sheikh Jarrah