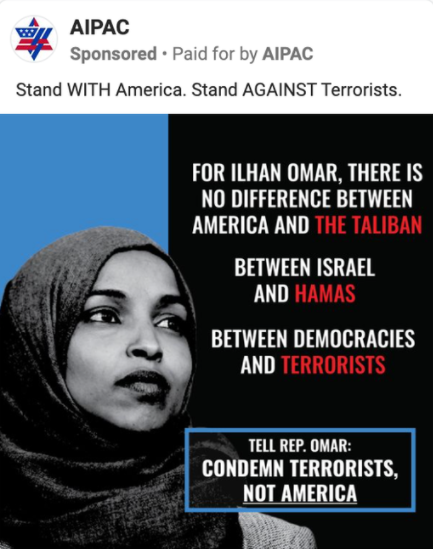 AIPAC’s paid advertisement on Facebook displays a darkened image of Rep. Omar with text reading “For Ilhan Omar, there is no difference between America and the Taliban, between Israel and Hamas, between democracies and terrorism.” The image’s accompanying text post reads “Stand WITH America. Stand AGAINST Terrorists.”

“AIPAC has once again launched a dishonest and dangerous smear campaign against Congresswoman Ilhan Omar. AIPAC’s attempt to spread this vile, Islamophobic language to Facebook users could incite threats of violence against Rep. Omar and other American Muslim leaders. Put simply, AIPAC’s bigotry is placing Ilhan Omar’s life at risk. Facebook should immediately take down these vile ads and congressional leaders must condemn AIPAC for continuing to incite Islamophobic hatred against Rep. Omar.”