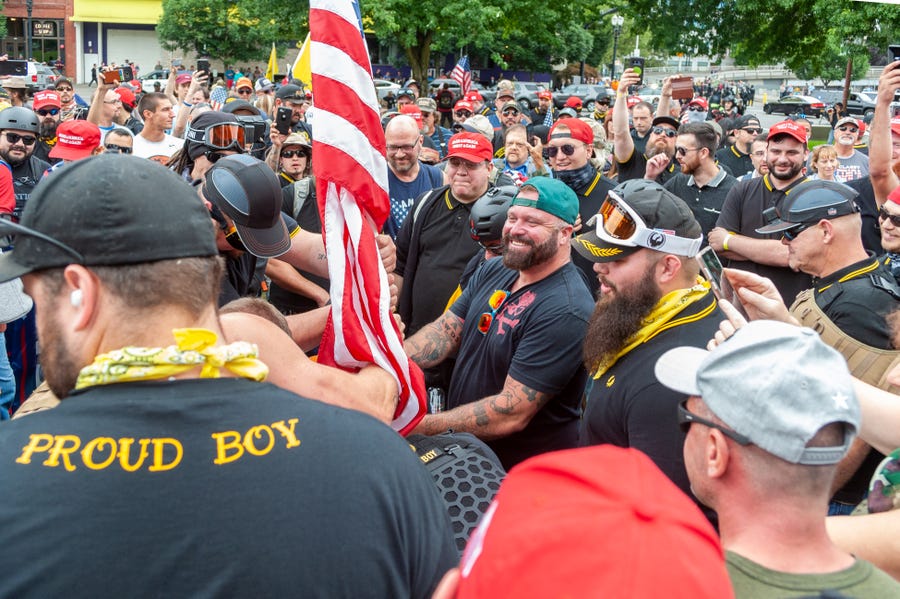 (WASHINGTON, D.C., 9/30/20) — The Council on American-Islamic Relations (CAIR), the nation’s largest Muslim civil rights and advocacy organization, today condemned a call last night by President Trump for a notorious white supremacist and anti-Muslim group to “stand by” for the upcoming elections.

In last night’s presidential debate, moderator Chris Wallace asked Trump if he was “willing tonight to condemn white supremacists and militia groups and to say that they need to stand down and not add to the violence in a number of these cities as we saw in Kenosha and we’ve seen in Portland?” Trump asked, “what do you want me to call them? Give me a name. Who would you like me to condemn?” When Biden referenced the Proud Boys, a white supremacist and anti-Muslim group, Trump said, “The Proud Boys, stand back and stand by.”

SEE: “Stand back and stand by”: Trump declines to condemn white supremacists at debate

“They are known for anti-Muslim and misogynistic rhetoric. Proud Boys have appeared alongside other hate groups at extremist gatherings like the ‘Unite the Right’ rally in Charlottesville. Indeed, former Proud Boys member Jason Kessler helped to organize the event, which brought together Klansmen, antisemites, Southern racists, and militias. Kessler was only ‘expelled’ from the group after the violence and near-universal condemnation of the Charlottesville rally-goers.”

In 2017, the Proud Boys – along with other white supremacist, neo-Nazi, anti-government, racist and Islamophobic groups – took part in coordinated anti-Islam rallies nationwide.

“Refusing to condemn white supremacy is shameful, and encouraging white supremacists to ‘stand by’ for possible violence is blatantly threatening. Elected officials across the political spectrum must repudiate President Trump’s hateful rhetoric, which long ago went from being disturbing and embarrassing to destabilizing and dangerous.”

He noted that CAIR recently condemned Trump’s “racist and xenophobic” national origin-based attack targeting Muslim Congresswoman Ilhan Omar (D-MN) in which he claimed that one of the first Muslim women elected to Congress is not part of “our country.”

Each year, CAIR’s conducts a non-partisan “Muslims Vote” campaign designed to empower American Muslims by increasing their capacity and presence in the political process.