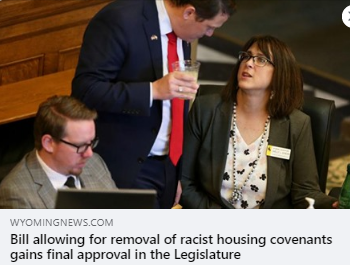 House Bill 91 would allow homeowners to remove racially-restrictive covenants from real estate deeds in Wyoming. The legislation gained final approval from the Senate and now goes to Gov. Mark Gordon for consideration.

“We welcome the approval of this legislative effort to remove a lingering remnant of systemic anti-Black racism and white supremacy,” said CAIR Government Affairs Director Robert McCaw. “While fortunately unenforceable, racist language in housing covenants remain as a stain on the ideals of equality and inclusion we should all follow.”

He noted that last year, CAIR welcomed that signing of new laws giving localities the power to remove Confederate monuments and that repeal racist language in Virginia’s Acts of Assembly.

Hooper noted that yesterday, CAIR welcomed the removal of a confederate statue in Emporia, Va., and the plan to remove a confederate monument from Asheville, N.C.