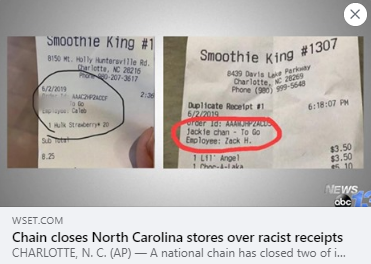 National chain Smoothie King announced that it closed two of its North Carolina stores and two workers were fired after racist names, including the n-word and “Jackie Chan,” were added to two customer receipts.

“The continued occurrence of racist incidents in North Carolina and nationwide indicates the need to teach young people about systemic racism and white supremacy,” said CAIR National Communications Director Ibrahim Hooper. “Banning the teaching of critical thinking on matters of race will only serve to perpetuate bigotry.”