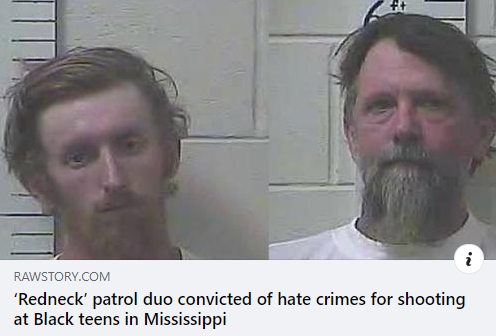 (WASHINGTON, D.C., 8/26/2021) – The Council on American-Islamic Relations (CAIR), the nation’s largest Muslim civil rights and advocacy organization, today welcomed the hate crimes convictions of a white father and son for shooting at Black teens as part of a “redneck neighborhood patrol” and urged that the sentences handed down send the message that racism will not be tolerated.

A jury convicted the two men of two counts of simple assault and felonious mischief. Officials noted that their social media posts included “You Loot We Shoot” and images of a Confederate flag. They are due to be sentenced on Friday.

“We welcome the convictions in this disturbing case and hope the sentences handed down will send a message that anti-Black racism and bigotry will not be tolerated in Mississippi or anywhere in our nation,” said CAIR National Communications Director Ibrahim Hooper.

He noted that earlier today, CAIR expressed solidarity with the Jewish community in New Mexico after a cross was burned at a Jewish family’s home in that state.