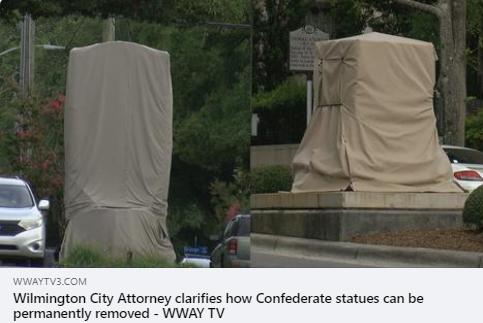 The Wilmington, NC city council voted Monday to permanently remove two Confederate statues from public view. The statues, donated to the city by the United Daughters of the Confederacy (UDC) in 1901 and 1922 respectively, were removed from public view in 2020 due to laws related to public safety concerns. State law prohibits local authorities from unilaterally removing monuments unless they are owned by a private party and a legal agreement is reached but does allow for temporary relocation. Following negotiations with the city, a local UDC chapter asserted ownership over the two statues in a July 5 letter. The statues will remain in storage until the chapter takes possession of them.

During a Monday night meeting of the Catawba Co., N.C., Board of Commissioners, members of the public debated the removal of a statue dedicated to the “grand cause” of the Confederacy. Kenyon Kelly, co-founder of the Catawba County Truth and Reconciliation Committee, the group that started efforts to remove the statue, referred to it as a “tribute to white supremacy” and called for its immediate removal. CAIR previously supported the removal of the statue.

“Continuing to honor white supremacist traitors creates a hostile and potentially-dangerous environment for members of minority communities in North Carolina and nationwide,” said CAIR National Communications Director Ibrahim Hooper. “We repeat our call for all monuments to slavery, systemic anti-Black racism and white supremacy to be removed and urge community leaders to work toward a more just and equitable society.”