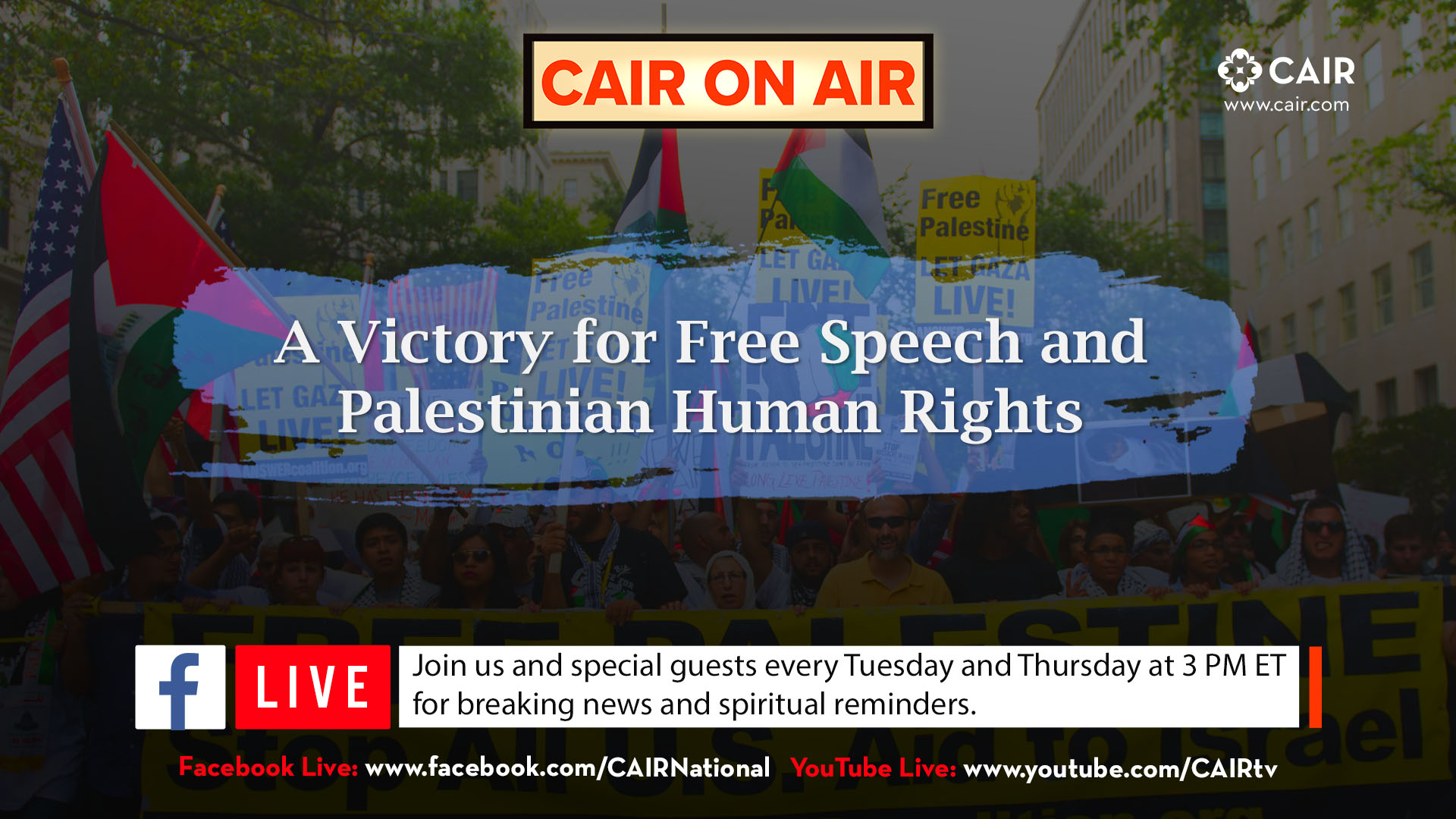 (HOUSTON, TX, 1/31/22) – Today at 3 p.m. ET, the Houston chapter and national office of the Council on American-Islamic Relations (CAIR) plan to hold a virtual press conference to discuss a federal judge’s decision to block the State of Texas from enforcing its anti-BDS law against a Texas businessman who boycotts Israel in protest of its human rights abuses against Palestinians.

WHAT: CAIR, CAIR-Houston Press Conference on Victory in Free Speech Lawsuit Against the City of Houston, Texas Attorney General

[NOTE: Reporters who would like to ask questions during the event can email CAIR National Communications Coordinator Ismail Allison at iallison@cair.com to request a link to join]

In a statement, William White, Director of Operations at CAIR-Houston said:

“We celebrate this step toward a more just state, where free speech is embraced as it should be. I look forward to the law being overturned, just as it was in 2019 after the first anti-BDS law came down from the legislature. Whatever the case, Texans can be rest assured CAIR will fight for the right to freedom of speech and protest in the halls of our courts and government.”

In a statement, John Floyd, CAIR Houston Board of Directors President and Chairman, said:

“The right to boycott has been enshrined in a constitutionally protected free speech right for generations. From the fight for civil rights in this country, overcoming racist Jim Crow era legislation and ordinances, to joining the worldwide struggle to overturn the racist regime in apartheid South Africa, boycotts have consistently been upheld by our judiciary system as a non-violent exercise of free speech. The Texas anti-BDS statute amounts to a requirement that businesses take an oath that they will not boycott Israel. No other foreign government receives this sort of state-sponsored loyalty.

“We are pleased that Federal District Judge Hanen, declared the statute unconstitutional as it applies to our client, and we will continue this litigation until we are successful in overturning the statute statewide. The State of Texas has already appealed the judge’s injunction, and we expect a long fight against those who would muzzle our voices against the injustice and violence being committed against the Palestinian people. This statute is blatantly unconstitutional, and we are committed to the long-term success of this struggle.”

BACKGROUND: CAIR filed the suit on behalf of A & R Engineering and Testing, Inc., an engineering firm, the owner of which is of Palestinian heritage, that was asked by Houston to sign the anti-BDS clause in its contract. The owner of the company has done more than two million dollars of business with Houston over the last 20 years.

The Texas law requiring a pledge of support for Israel is one of many state laws nationwide designed to block the growing BDS movement in the United States and worldwide in defense of Palestinian human rights.

In 2019, CAIR won a landmark victory in a suit over the first version of the Texas law on behalf of Bahia Amawi, the Texas speech-language pathologist who lost her job because she refused to sign a “No Boycott of Israel” clause. That victory caused the state legislature to enact the new law.