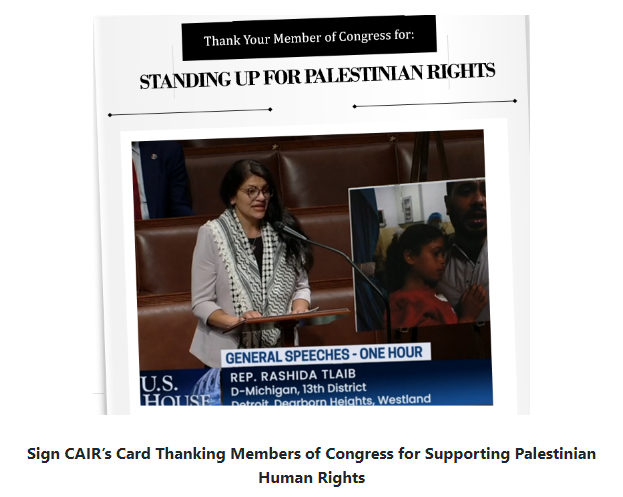 (WASHINGTON, D.C., 5/14/20) – The Council on American-Islamic Relations (CAIR), the nation’s largest Muslim civil rights and advocacy organization, today thanked member of Congress who yesterday stood in support of Palestinian human rights as dozens of civilians are being massacred by Israel’s bombardment of Gaza.

According to media reports, the Israeli government’s ongoing bombardment of the Gaza Strip has so far killed 119 Palestinians, including 31 children and 19 women. An entire family of 6 was killed in their home.  In addition, the Israeli government continues to attack worshippers and protesters at the Al-Aqsa Masjid compound while fighting to expel Palestinian families from Sheikh Jarrah.

Several Democrats in House of Representatives spoke out against America’s military support for Israel and called for the protection of Palestinians’ rights.

TO VIEW ALL THE REMARKS IN SUPPORT OF PALESTINIAN RIGHTS, GO TO:

“We thank all those elected officials who stood in support of Palestinian human rights and against uncritical and un-American support for Israel’s brutal actions against civilians, including the latest ethnic cleansing of Palestinians in Sheikh Jarrah, which is the origin of the latest brutality,” said CAIR National Executive Director Nihad Awad. “Lawmakers, and the American public, are now seeing that continued support for Israel’s apartheid, racial and religious segregation and disregard for basic human rights is not in our nation’s best interests and violates the ideals upon which our nation was founded.”

Sheikh Jarrah: Amid Israel’s daily horrors, we must not forget the original sin https://www.middleeasteye.net/opinion/sheikh-jarrah-israel-palestine-daily-horrors-original-sin

He added that CAIR also joined the US Council of Muslim Organizations (USCMO) in encouraging the American Muslim community, Palestinian Americans, and allies to both communities to attend, cosponsor and support Palestine solidarity rallies taking place in cities throughout the nation this week and weekend.

CAIR has called on the Biden administration to end its silence in response to Israel ignoring White House calls for de-escalation and opting to increase missile strikes on Palestinian civilians prior to engaging in ceasefire talks.