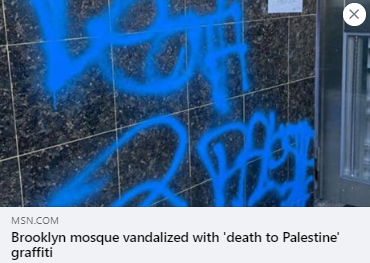 The vandalism was discovered around 6 a.m. as worshipers arrived to celebrate the Eid al-Fitr (Festival of Breaking the Fast) holiday marking the end of the month-long fast of Ramadan. Eid al-Fitr is one of the holiest days in Islam.

“We urge local, state and federal law enforcement authorities to investigate the apparent bias motive for this vandalism and call on elected leaders to denounce this hateful act and the violent rhetoric.

“The Muslim community is facing attacks around the world, and the lack of effective responses to atrocities committed abroad seem to have emboldened those here to act on their hatred for Muslims and Palestinians.

“Given the events in Palestine and the Eid holiday, law enforcement must investigate this vandalism as a hate crime and swiftly apprehend the suspect. Muslims deserve to worship in peace whether in Al-Aqsa mosque in Jerusalem, throughout Palestine or in Tayba Islamic Center, Brooklyn.”

“Over the past four days we have seen a rise in disturbing rhetoric from public officials, city agencies, and political candidates that completely dehumanizes Palestinians and Muslims alike. Several elected officials have thrown blind support behind Israel’s atrocities with little regard for how that affects Muslim communities, as both constituents at home and humans abroad. The vandalism that took place earlier today is a direct consequence of that.

“We are calling on public officials to cease this dangerous rhetoric of dehumanization and make an active effort to protecting Muslim communities. Considering the circumstances, we are calling on law enforcement to investigate this incident as a hate crime. Protecting Masjids should not be politically contentious.”

The vandalism comes on the heels of widespread human rights atrocities by Israeli authorities in Gaza and Jerusalem, including the forcible expulsion of Palestinians from their homes in Sheikh Jarrah and the desecration and attack on Al-Aqsa (one of the holiest places of worship in Islam) during Ramadan evening prayers.

ILCNY is an umbrella of over 90 mosques and organizations, Majlis Ash-Shura of New York serves as the official representative of its members with the media, organizations, advocacy groups, political candidates, and government institutions. Its mission is to provide a united platform for the New York Muslim community through advocacy, network building, and representing important issues for marginalized communities.