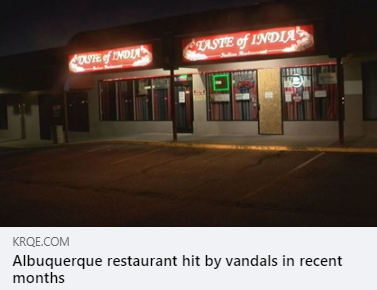 (WASHINGTON, D.C., 12/14/2020) – The Council on American-Islamic Relations (CAIR), the nation’s largest Muslim civil rights and advocacy organization, today called on state and federal law enforcement authorities to investigate a string of attacks on an Indian restaurant in Albuquerque, N.M., as hate crimes.

Surveillance video shows a man shattering the window of the Taste of India restaurant, the third time it has been targeted in recent months. In one of those incidents, racial slurs referring to “slumdog millionaires garbage” – an apparent reference to a film set in India – were written on a newspaper tied around a rock thrown at the restaurant.

“The rising tide of bigotry in our nation means that all minority communities are being targeted by hatred and violence. We ask state and federal law enforcement authorities to treat these apparent hate incidents with the seriousness they deserve.”

Hooper noted that CAIR has condemned a number of racist, xenophobic and Islamophobic incidents in New Mexico.

He added that CAIR and the American Muslim community are standing in solidarity with all those challenging xenophobia, anti-Black racism, Islamophobia, anti-Semitism, and white supremacy.

Yesterday, CAIR called on the U.S. Department of Justice (DOJ) to launch a civil rights investigation of attacks on historic Black churches in Washington, D.C., allegedly by those taking part in yesterday’s pro-Trump protests.