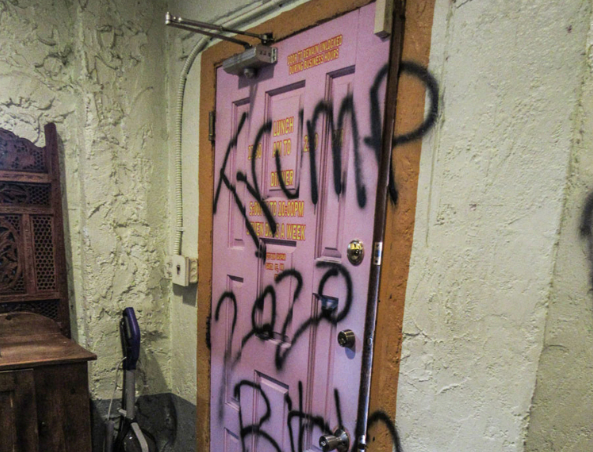 On Monday, the owner of the India Palace restaurant in Santa Fe, N.M., found his business trashed and racist and white supremacist slurs such as “white power,” “sand n**ger” and “go home” spray-painted on the interior. [NOTE: Bigots often use the racist term “sand n**ger” to target Muslims and Arab-Americans.] The hate graffiti also included “Trump 2020.” Damage to the facility is estimated to be more than $100,000.

“This disturbing hate attack once again demonstrates that growing white supremacy, xenophobia, Islamophobia, and racism target every minority community and must be challenged by people of all races, faiths and backgrounds,” said CAIR National Communications Director Ibrahim Hooper. “We call on President Trump, whose name was used by the hate vandals, to stop promoting bigotry and division and instead seek to bring our nation together at this time of crisis.”

He noted that on Sunday, CAIR condemned President Trump’s racist anti-Somali national origin-based attack on Muslim Congresswoman Ilhan Omar (D-MN), his bigoted use of anti-Asian terms to describe the COVID-19 global pandemic and his defense of statues honoring Confederate “traitors.”

For the past several months, CAIR has condemned multiple anti-Asian hate crime attacks that have taken place across the nation.