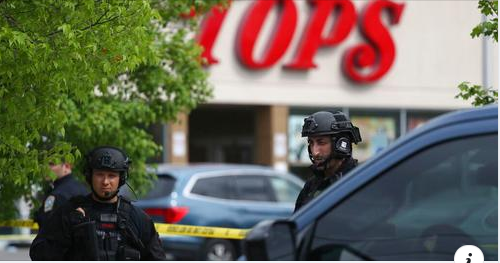 Media reports indicate that the alleged shooter live-streamed the attack on Twitch and posted an online manifesto in which he describes himself as a white supremacist. The manifesto said he was motivated by the “great replacement” conspiracy theory often repeated on right-wing outlets that white people are being replaced by other races. In it he says he is a white supremacist and antisemite. His manifesto reportedly stated: “If there’s one thing I want you to get from these writings, it’s that White birth rates must change. Everyday [sic] the White population becomes fewer in number.”

The alleged gunman also reportedly drew inspiration from the Christchurch, New Zealand, mosque massacres and from other mass shootings worldwide.

“We condemn this horrific white supremacist attack on Buffalo’s Black community. CAIR-NY sends its condolences to the families of those murdered and directly impacted by this tragedy. May our Creator give them strength to bear this loss and provide a speedy recovery to those injured. The shooter’s apparent racist motivation is another reminder of the threat white supremacy poses to our country and communities of color. Our government must prioritize efforts to combat violent bigotry.”

She noted that the Buffalo Muslim community launched a fundraiser to support victims of the shooting.

“We condemn both the white supremacist terrorist attack targeting Black men and women in Buffalo today and the racist rhetoric that has sparked such violence again and again.

“The constant repetition of white supremacist conspiracy theories on social media and even mainstream media outlets has led to horrific violence in places as distant as Christchurch, El Paso, Oslo, and Charleston. Those who promote racism, white supremacy, antisemitism, Islamophobia, and other forms of bigotry must be held accountable for the violence they inspire.

“We extend our condolences to the loved ones of everyone killed today in Buffalo, and we pray God grants justice to them in this life and the next.”

Mitchell added that CAIR has often spoken out against those who promote the “great replacement” and other racist conspiracy theories.

He said CAIR and the American Muslim community stand in solidarity with all those challenging white supremacy, antisemitism, anti-Black racism, xenophobia, Islamophobia, and all other forms of bigotry.