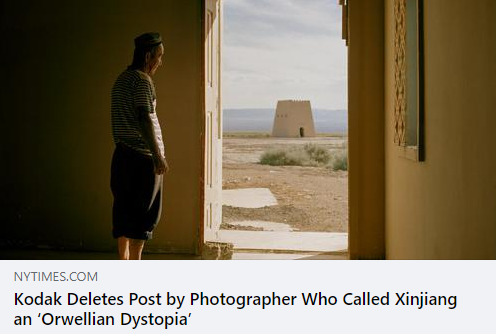 (WASHINGTON D.C., 7/21/2021) – The Council on American-Islamic Relations (CAIR), the nation’s largest Muslim civil rights and advocacy organization, today condemned a decision by Kodak to delete an Instagram post exposing the Chinese government’s repression of Uyghur Muslims and called on the company to restore the post to its Instagram account.

The post consisted of 10 photographs taken in the Uyghur region by French photographer Patrick Wack. The photos were initially posted on Wack’s Instagram account, and then shared on Kodak’s account last week. In the post, Wack described his photos as a visual narrative of the Uyghur region’s “abrupt descent into an Orwellian dystopia.”

This led to backlash from Chinese social media users, and Kodak deleted the post. The company also posted an apology on their Instagram account, saying the page is “not intended to be a platform for political commentary.” The company said Wack’s views “do not represent those of Kodak” and are not endorsed by the company.

The photos featured on Wack’s post were drawn from a series entitled “Out West,” in which the photographer draws visual parallels between the Chinese government’s settlement of the Uyghur region with members of the majority Han ethnic group and the westward expansion of the United States. The photos will be included in a book coming out in October.

“Kodak has a long history of celebrating photography that exposes injustice around the world, but deleting this post is an act of moral cowardice that undermines Kodak’s legacy and emboldens China to continue its genocide. We call on Kodak to resist Chinese pressure and immediately restore the post. American corporations must take a principled stand against China’s genocide and crimes against humanity.”

Mitchell noted that CAIR is currently calling on Virginia-based Hilton Worldwide Holdings (HTL) to drop plans to build a Hilton Hotel in XUAR on the site of a bulldozed and desecrated mosque.