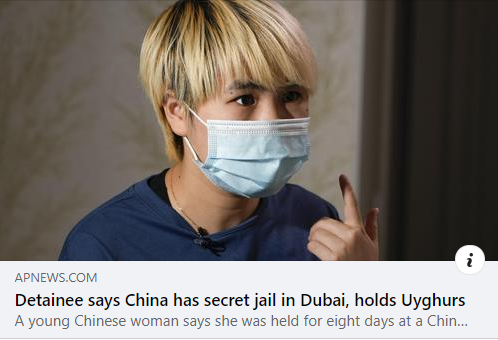 [NOTE: A “black site” is a secret facility used by a country as a prison and interrogation center, and the existence of which is denied by the government.]

According to media reports, a young Chinese woman said she was detained for eight days at a secret Chinese-run facility in Dubai. The woman was attempting to avoid extradition back to China, as her fiancé is considered a dissident for posting messages questioning Chinese media coverage of the 2019 Hong Kong protests and China’s border clash with India.

The woman reported being abducted from her Dubai hotel by Chinese officials and driven to a non-descript series of buildings on a deserted street. During her eight days at the facility, she was interrogated, threatened, and forced to sign legal documents in Arabic and English saying her fiancé abused her. The woman reported she saw two Uyghur women at the facility, one of whom was pleading with the guards to allow her to return to Turkey instead of China.

“The disturbing reports of a secret Chinese ‘black site’ in the United Arab Emirates must be thoroughly investigated by the State Department and United States Commission on International Religious Freedom.

“China is conducting a campaign of genocide against the Uyghur Muslims, and any Uyghurs sent back to that country will likely end up in concentration camps, or worse. Dissidents extradited to China face brutal punishment in labor camps and prisons.

“If any American allies are assisting in China’s genocide, our nation must hold those nations accountable and issue a warning to Uyghur-Americans who may be at risk if they visit such places.”

McCaw noted that CAIR has previously welcomed the State Department’s decision to include China in its 2021 genocide report.

He noted that CAIR is currently calling on Hilton Worldwide (NYSE: HLT) to cancel the corporation’s agreement to license the construction a Hampton hotel on the site of a bulldozed mosque in the Uyghur region of China.