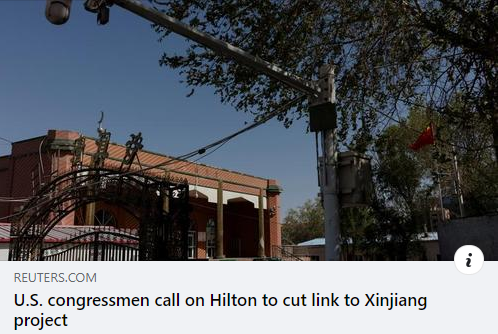 (WASHINGTON, D.C., 7/30/21) – The Council on American-Islamic Relations (CAIR), the nation’s largest Muslim civil rights and advocacy organization, today applauded the chairs of the bipartisan and bicameral Congressional-Executive Commission on China calling on Hilton Worldwide (NYSE: HLT) President and CEO Christopher Nassetta to cancel the corporation’s agreement to license the construction a Hampton hotel on the site of a bulldozed mosque in the Uyghur region of China.

Yesterday, Senator Jeff Merkley (D-OR) and Representative Jim McGovern (D-MA), the Chair and Cochair of the Congressional-Executive Commission on China sent a letter to Hilton Worldwide President and CEO Nassetta urging the international hotel chain “halt construction and otherwise disassociate itself and its brand from the hotel project in Hotan,” as “the continued presence of international brands” in the Uyghur region of China “has given the Chinese government a public relations tool to whitewash…human rights abuses.”

The Chairs were joined on the letter by Commissioners Senator Marco Rubio (R-FL) and Representative Christopher H. Smith (R-NJ), both former commission chairs.

The letter’s timing coincides with Rep. Smith and Rep. Thomas Suozzi (D-NY) announcing the formation of the Congressional Uyghur Caucus. The caucus was launched with the support of the human right’s nonprofit organization Campaign for Uyghurs. Yesterday, CAIR congratulated Reps. Smith and Suozzi and Campaign for Uyghurs on the caucus’ announcement.

The letter also reiterates that these “abuses are among those the U.S. government has determined to be genocide and crimes against humanity against Uyghurs and other Muslim minorities” and demands that “Hilton should not allow its name to be used to perpetuate and promote the cultural erasure and repression of the millions of Uyghurs” living in that region.

CAIR is calling on Hilton Worldwide Holdings to drop licensing agreement to build a Hampton hotel on the site of a mosque demolished by bulldozers in the city of Hotan in Uyghur region of China.

“CAIR applauds the Congressional-Executive Commission on China for joining the growing number of civil and human rights organizations calling on Virginia-based Hilton Worldwide Holdings to drop plans to license a Hampton hotel in China’s Uyghur region on the site of a bulldozed and desecrated mosque.

“CAIR thanks Senators Jeff Merkley and Marco Rubio and Representatives Jim McGovern and Christopher Smith for joining the growing number of civil and human rights organizations calling on Hilton Worldwide Holdings to not profit from the Chinese government’s ongoing genocide and cultural erasure of Uyghur Muslims and other Turkic minorities.

“As an American-based corporation, Hilton Worldwide Holdings should recognize the U.S. government’s genocide designation and immediately cancel its tainted licensing agreement. No American should profit from the Uyghur genocide and the government of China must end its persecution of millions of innocent people.”

Earlier this week, CAIR called on shareholders in Hilton Worldwide Holdings to seek answers regarding the corporation’s agreement to license the construction of the Hampton hotel on the site of the bulldozed mosque in the Uyghur region of China. Hilton reported its second quarter earnings to shareholders on July 29.

Last month, The Telegraph revealed plans for the project. Hilton has reportedly not commented or responded to media inquiries regarding the project since then.