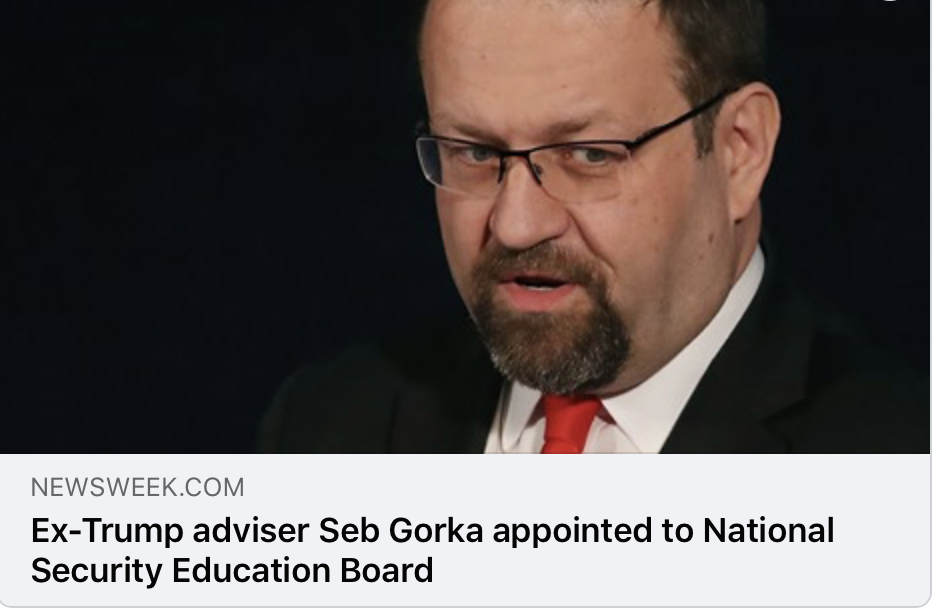 “Sebastian Gorka is a radical anti-Muslim bigot notorious for his dubious credentials and history of supporting racist and anti-Semitic groups. He should not serve in any federal position, much less one that involves shaping and funding educational studies,” said CAIR Director of Government Affairs Robert S. McCaw. “This appointment once again shows that President Trump is more interested in appointing bigoted loyalists than elevating qualified individuals.”

CAIR recently called on U.S. Agency for Global Media Chief Executive Officer Michael Pack to drop any possible consideration of  Gorka for a leadership role at Voice of America after CNN reported that he was a potential candidate.

In August 2017, CAIR welcomed the resignation of Gorka as a White House advisor.

CAIR previously called for Gorka’s dismissal from the Trump Administration following revelations that he “publicly supported a violent racist and anti-Semitic paramilitary militia” in Hungary and that he is a formal member of a Hungarian group listed by the U.S. State Department as having been “under the direction of the Nazi Government of Germany” during World War II.

Gorka has been criticized for his Islamophobic views, including once calling religious profiling of Muslims “common sense” and declining on several occasions to say whether President Trump believes Islam is a real religion.

SEE: How Did Sebastian Gorka Go From the Anti-Muslim Fringe to White House Aide?

SEE: Gorka Declines to Say if Trump Believes Islam is a Religion

CAIR also decried Katharine Gorka, Sebastian Gorka’s wife, a notorious Islamophobe in her own right, to be the new press secretary at Customs and Border Protection (CBP). CAIR notes, Katharine Gorka resigned from the position after two months.

Katharine Gorka has claimed that DHS trains its agents “falsely, according to [her]” that Islam is a “religion of peace.”

In 2014, Katharine Gorka wrote that when “Presidents Bush and Obama both publicly declared Islam to be a religion of peace,” it “struck a sour chord for many,” and that “American and Western leaders have preemptively shut down any debate within Islam by declaring that Islam is the religion of peace.”