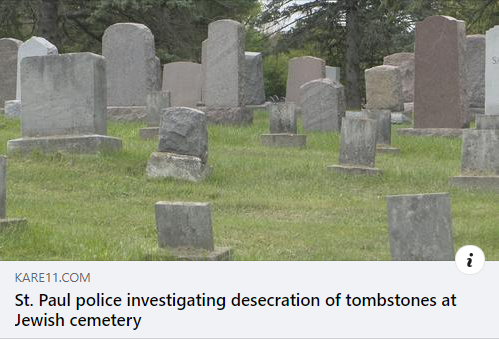 (MINNEAPOLIS, MN, 9/14/2021) – The Minnesota branch of the Council on American-Islamic Relations (CAIR-MN), today condemned the desecration of a Jewish cemetery in St. Paul and expressed solidarity with the Jewish community.

On Thursday morning, the supervisor of the cemetery found that 32 memorial monuments had been knocked over. The supervisor called the police, who he explained are conducting a hate crime investigation. The FBI is also reportedly investigating the incident.

“The recent rise in hate crimes targeting minority communities is disturbing and must be addressed by law enforcement,” said CAIR-MN Executive Director Jaylani Hussein. “We condemn this appalling attack and stand in solidarity with the Jewish community.”

He noted that earlier this month, CAIR-MN condemned an act of white supremacist vandalism at a Hmong cultural center in St. Paul.

Hussein said the American Muslim community and CAIR stand in solidarity with all those challenging anti-Asian and anti-Black racism, xenophobia, Islamophobia, anti-Semitism, white supremacy, and all other forms of bigotry.