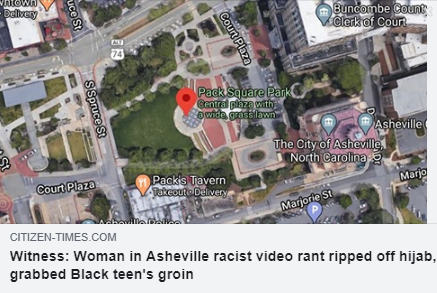 (WASHINGTON, D.C., 7/10/20) – The Council on American-Islamic Relations (CAIR) today condemned an alleged racist incident in Vermont in which a man reportedly shouted racist slurs at a white woman and her biracial daughter and an incident in North Carolina in which a woman allegedly ripped off a Muslim woman’s Islamic scarf (hijab) and assaulted a Black teenager.

CAIR, the nation’s largest American Muslim civil rights and advocacy organization, said that in the Vermont incident, the alleged harasser shouted “f— negro child,” “white power,” and “African f—,” as the victim and her child left a post office.

In North Carolina, a woman allegedly attacked Muslim woman wearing hijab and a 14-year-old girl who was Black “after yelling racial slurs.”

“Americans of all backgrounds must be able to go about their daily lives without fear of harassment by bigots. Everyone in our society must take a proactive role in pushing back against the rising tide of racism and white supremacy we are witnessing nationwide.”

He noted that CAIR recently also condemned racist incidents in Indiana, Tennessee, Virginia, and Vermont, saying such expressions of racism and white supremacy are “unfortunately a daily occurrence.”