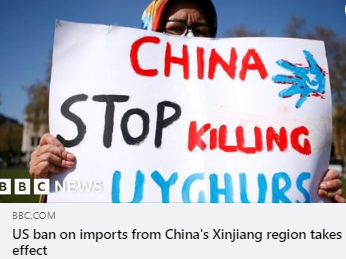 (WASHINGTON, D.C., 6/21/22) – The Council on American-Islamic Relations (CAIR), the nation’s largest Muslim civil rights and advocacy organization, today called for “vigorous enforcement” of a new law going into effect today that blocks imports linked to forced labor by Uyghur Muslims and other persecuted groups in China.

The Uyghur Forced Labor Prevention Act (UFLPA), which was signed by President Biden last year and goes into effect today, prohibits the importation of goods made with forced labor in China’s Xinjiang region by Uyghur Muslims and other Turkic ethnic minorities.

“The State Department is committed to working with Congress and our interagency partners to continue combating forced labor in Xinjiang and strengthen international coordination against this egregious violation of human rights.”

“There must be vigorous enforcement of the Uyghur Forced Labor Prevention Act in order to send the Chinese government the message that its ongoing genocide targeting Uyghur Muslims will not be ignored by our nation or the international community,” said CAIR Government Affairs Director Robert McCaw.

He noted that CAIR recently responded to the unprecedented leak of hacked files exposing China’s ongoing genocide of Uyghur Muslims in concentration camps by calling on American corporations to stop doing business with the Chinese Communist Party.

Last month, CAIR welcomed the release by the U.S. Customs and Border Protection (CBP) of two sample Known Importer Letters relating to UFLPA that the agency had promised to issue to importers identified as potentially subject to the new law. In addition to the sample Known Importer Letters, CBP released guidance on enforcement mechanisms under UFLPA.

CAIR also called on Muslim-majority nations around the world to unite and demand that China immediately stop the genocide of Uyghur Muslims.

The Chinese government is targeting Uyghur Muslims and other Turkic ethnic minorities with a campaign of genocide. Millions of Uyghurs have been detained in concentration camps in which beatings, torture and rape are the norm. Millions more are being used as slave labor on plantations and in Chinese factories.

CAIR and more than 40 international partners have an ongoing campaign calling on members of the public to not make reservations at Hilton Hotels due to the corporation’s connection with the Uyghur genocide.

COMMUNITY ADVISORY: CAIR Calls on Public to Not Reserve at Hilton Hotels Over Holidays Due to Uyghur Genocide Connection – #BoycottHilton

In its country report for China, the State Department said:

“Genocide and crimes against humanity occurred during the year against predominantly Muslim Uyghurs and members of other ethnic and religious minority groups in Xinjiang. These crimes were continuing and included: the arbitrary imprisonment or other severe deprivation of physical liberty of more than one million civilians; forced sterilization, coerced abortions, and more restrictive application of the country’s birth control policies; rape; torture of a large number of those arbitrarily detained; forced labor; and draconian restrictions on freedom of religion or belief, freedom of expression, and freedom of movement.”

CAIR also called on Secretary of State Blinken to offer asylum to four Uyghurs, including a 13-year-old-girl, that Saudi Arabia reportedly plans to deport to China unless another country offers them refuge.

CAIR joined several advocacy groups, including Free Uyghur Now, Uyghur American Association, Campaign for Uyghurs, and Uyghur Human Rights Project to stage protests outside the Kingdom of Saudi Arabia’s embassy in Washington D.C, and consulates in New York and Los Angeles, to call on the Kingdom to halt its planned deportation of Uyghurs to China.

In January, CAIR joined more than 70 Uyghur, interfaith, and human rights organizations to send letters to the Saudi government calling on them to stop the deportations.