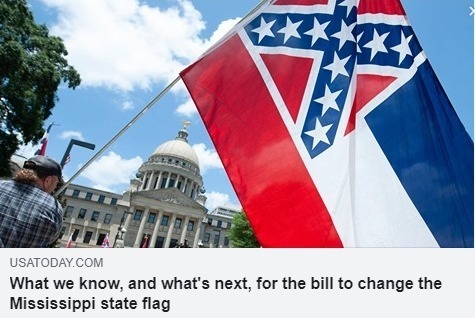 (WASHINGTON, D.C., 6/29/20) – The Council on American-Islamic Relations (CAIR), the nation’s largest Muslim civil rights and advocacy organization, today welcomed votes by the Mississippi legislature to remove the Confederate emblem from that state’s flag.

The bill to remove the Confederate symbol passed the state Senate 37-14 and the state House with a vote of 84-35. The governor has indicated that he will sign the bill.

SEE: What we know, and what’s next, for the bill to change the Mississippi state flag (USA Today)

CAIR’s statement on the flag came amid recent anti-racism protests following the killing of George Floyd that resulted in the removal of Confederate statues, monuments and symbols nationwide.

“We welcome the decision by Mississippi lawmakers to join the growing movement nationwide to remove vestiges of the Confederacy and its racist legacy,” said CAIR National Communications Director Ibrahim Hooper. “We urge the governor to sign the bill as quickly as possible.”

He said CAIR has repeatedly urged the removal of Confederate holidays, symbols and racist laws nationwide.

Hooper noted that CAIR and the American Muslim community are standing in solidarity with all those challenging anti-black racism.