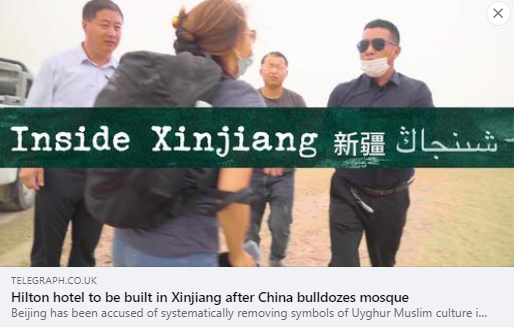 (WASHINGTON D.C., 7/26/2021) – The Council on American-Islamic Relations (CAIR), the nation’s largest Muslim civil rights and advocacy organization, today called on shareholders in Virginia-based Hilton Worldwide Holdings (NYSE: HLT) to seek answers regarding the corporation’s agreement to license the construction a hotel on the site of a bulldozed mosque in the Uyghur region of China.

Hilton plans to host report its second quarter earnings to shareholders on July 29th. Last month, The Telegraph revealed plans for the project. Hilton has reportedly not commented or responded to media inquiries regarding the project since then.

“Major shareholders should call on Hilton Worldwide Holdings to explain why the company remains silent about its plan to license the establishment of a hotel on the site of a mosque that was destroyed as part of China’s ongoing and well-documented genocide of Uyghur Muslims,” said CAIR Deputy Director Edward Ahmed Mitchell. “American corporations must no longer be complicit in China’s genocide.”

CAIR is calling on Hilton Worldwide Holdings to drop plans to build a hotel on the site of a mosque demolished by bulldozers in the city of Hotan in Xinjiang Province.

Complicit: Hilton Must Cancel Plan to Build Hotel on Site of Bulldozed Uyghur Mosque in China

Earlier this month, CAIR welcomed the inclusion of China in the 2021 U.S. Department of State Report to Congress Pursuant to Section 5 of the Elie Wiesel Genocide and Atrocities Prevention Act of 2018.

That report says China is committing a genocide against the Uyghurs and other Turkic Muslim ethnic minorities in Xinjiang Province and noted that President Biden has expanded the previous administration’s sanctions on Chinese officials, government entities, and companies involved in the genocide.