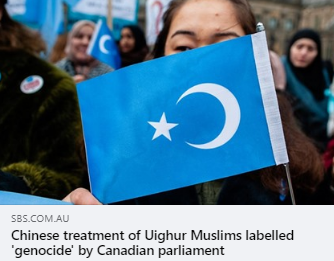 On Monday, Canada’s parliament issued a non-binding motion that described China’s treatment of Uyghur Muslims as constituting genocide. The motion’s passage is part of a larger effort to encourage Prime Minister Justin Trudeau’s pronouncement of genocide as well.

Should the treatment continue, the House of Commons called on the International Olympic Committee to relocate the 2022 Winter Olympics, which is set to take place in Beijing.

The Canadian opposition Conservative Party introduced the motion, and the House of Commons voted 266-0 to pass it. Despite the widespread support of the Liberal party, Trudeau and his administration abstained from the vote.

“We welcome the Canadian parliament’s efforts to push back against China’s heinous actions against Uyghur Muslims,” said CAIR Government Affairs Director Robert McCaw. “CAIR calls on the Biden-Harris administration and Congress to follow the Canadian government’s example. It is the duty of the international community to take immediate and concrete action to stop China’s ongoing crimes against humanity.”

The Canadian parliament’s motion was issued one month following the United States’ government adoption of the term “genocide” to describe the human rights abuses in Xinjiang.

Domestically, the Council on American-Islamic Relations has remained steadfast in its campaigns on behalf of Uyghur Muslims. CAIR has welcomed the endeavors of the US government to ban Chinese slave labor cotton imports and continues to support Congress’ forced labor legislation.