CAIR Condemns Racist Incident at Memorial to Enslaved People in NC, Racist Attack on Asian Woman and Son in Nevada 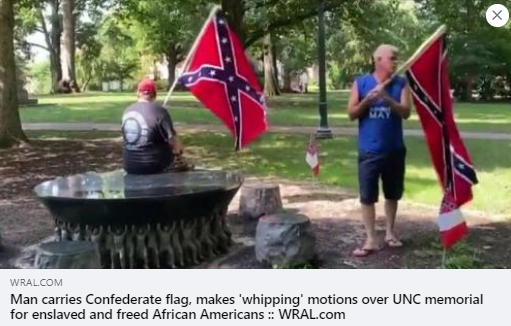 (WASHINGTON D.C., 7/12/2021) – The Council on American-Islamic Relations (CAIR), the nation’s largest Muslim civil rights and advocacy organization, today condemned a racist incident in North Carolina at a memorial to enslaved people and a racist attack on an Asian woman and her 6-year-old son in a mall in Nevada.

On Saturday, two men with Confederate flags were filmed walking around the Unsung Founders memorial, dedicated to the enslaved Africans who were forced to build the University of North Carolina.

One of the men, who allegedly participated in the Jan. 6 riot at the U.S. Capitol, said he wished he had slaves, and then made whipping gestures. He also allegedly said he would like to spill acid on the memorial. When asked to leave the monument, the man made a white power gesture, sang “Dixie,” a song popular in the Confederacy, and both he and the other man used the n-word repeatedly.

In a TikTok video shared Wednesday, a white woman could be seen engaging in a racist tirade and shouting “China” at a mother and son in a Las Vegas, Nev., mall. After verbally harassing the mother and son, the perpetrator allegedly struck the child before being escorted away by mall security. Writing about the incident on TikTok, the mother said mall security let the perpetrator go. She said she would press charges.

“All Americans must stand firm against the rising number of racist and white supremacist incidents we are witnessing nationwide, fueled by irresponsible ‘leaders’ who seek cheap political gain at the expense of our national unity and respect for diversity,” said CAIR National Communications Director Ibrahim Hooper.

He added that CAIR has been vocal in condemning anti-Asian racism and Confederate symbols nationwide.